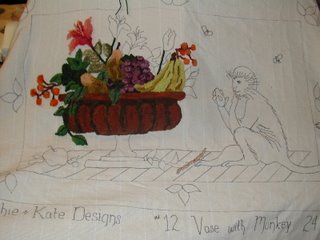 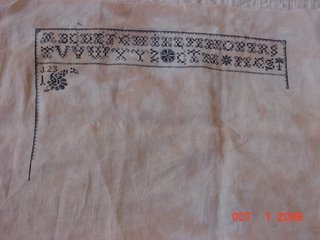 How can it be October already???????? Time certainly flys by. I would say when you are having fun but with my work project consuming most of my time for the past couple of months - I can't say I have been having a lot of stitching fun. I have gotten a lot of knitting done while traveling on the company plane and while I am out of town. It is just easier to focus on knitting than taxing my eyes even further working on tiny linen and a chart. However I do have an update photo to show on my Permin Celle 1826 repro sampler. I discovered a mistake in the motif I am currently working on and had to pull out the whole motif and start over - DRAT - Do I have to be a perfectionist - I figured it was something that might haunt me later so I'd better do the right thing.

I have a neat hooked rug WIP to share. It is a design from my friend Katie Puckett's design catalog. It is called Fruit Vase with Monkey - I started it at a rug camp in March with a national teacher Vivily Power - she did a marvelous job with the wool for the vase and fruit. Katie has dyed the backround wool and a few other colors that I needed to fill in here and there. I plan to tackle the monkey with another national teacher Diane Stoffel at a rug camp in January.
I think he looks like a Marmoset monkey - I'm sure it will be a challenge to get the coloration and markings correct but Diane is super with animals so I think it will be just great. I hope to have a lot more done by January but then there is the MERMAID - OMG - I simply must finish her this year! I won't be able to hold my head up in public if I don't have a rug to display this year at the show in January. I don't have that much more to complete - just about 1/2 of the outer border is it. I must press on. Hope the fall is a great one! My favorite time of the year - Enjoy! Melody
Posted by woolwoman at 3:09 PM 1 comment: