Both my folks stitch - my mom stitches samplers and seasonals and my dad stitches awesome things - not usually samplers but he did do the beautiful Rachel Hyde for me a couple of years ago.  He enjoys stitching Mirabilia designs and my mom and I love that he loves stitching them.  We have quite a collection of them hanging in our homes.  The last one he did for me was Bluebeards Princess Mermaid and I have so many of them framed - I decided I wanted this one made into a pillow.  I had a very specific idea about what I wanted for this pillow - I did not want a glitzy overwhelming trim or fabric - I wanted something simple but elegant that would leave the Princess as the center attraction.  I debated about sending her to california to Marlene's and I talked to several other finishers about her.  One woman even refused to take it saying that Mirabilia's needed to be framed.  I tried a new finisher here in Florida. 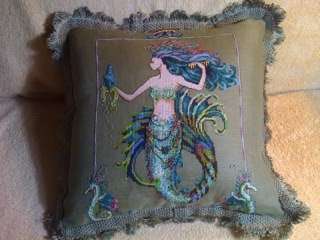 The finishing as far as fabric choice, trim choice and workmanship is great - however I was horrified to see that she practically cut off the top and bottom motifs on this piece.  EGADS - wouldn't you think a professional finisher would not do something like this??????????  Plus it is a 14" pillow and I think a 16" would have been much better - it looks so small on my sofa - sad shame to have this lovely piece so poorly finished - I am sorely disappointed - oh and just so you don't think I properly communicated my wishes - NOT - I sent at least 3 very specific emails saying exactly what I wanted and truth be told - this is a 2nd attempt - she had finished as a box pillow and framed out the mermaid in fabric which I specifically told her I DID NOT WANT !!!!!!!!!!!  Ok - enough with the complaining - I guess my point is - no matter how much info you give someone about what "you" want - problems can still arise.

Lot's of stash has been purchased lately - Nothing from market has arrived yet and I am trying to be good - really I am.  I made another trip to Mt Dora to visit A Stitchers Dream this past Saturday and took a class on basic hardanger by Victorias Sampler.  the shop owner is quite the hardanger expert and a big fan of Thea's designs.  I was a complete failure - had to pull out everything I put in and start over - by that time - we had already taken a luxurious two hour lunch at the Garden Gate tearoom and all I wanted to do was SHOP!  So I'll restart that class piece another time (maybe LOL)

Here is some photos (not all) of a few things that I have gotten lately.  I was so thrilled when I saw on Shakespeares Peddler newsletter that she was stocking Elizabeth Savilles sampler by**** corrected from Fingerwork to Dames of the Needle.  I love Terri's blog face showing this lovely sampler.  Terri was kind enough to share her conversion with me but being the silk snob that I am - I asked Theresa to convert it to silks for me - Here is her conversion which is Gloriana silk floss and Gloriana Florimell - my new favorite overdyed silk - gorgeous huh? 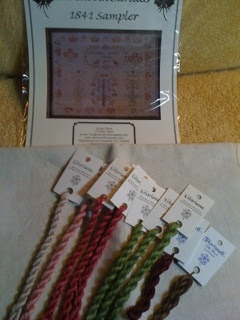 Under the silk is Sugar and Spice linen from Australia in Gravestone - I probably won't use that color for Elizabeth but it was part of the stash haul.
Next is Mary Hannah Gipson from SANQ in the called for threads - the linen I chose I had never seen before - it was WDW Cocoa in 30ct - I would have preferred 35ct but the shop was low on linen. 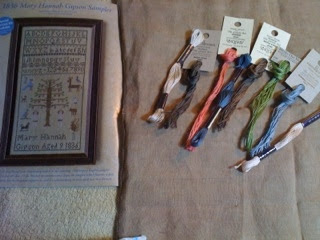 These little Button Up Birdie ornament charts are soooo darling - I could not resist picking up what had been released so far - I think all in all there will be 12 of them.  The linen is WDW Mocha in 35ct and I'm sure I will use the GAST or whatever they called for.  I did not buy the embellishment pack - I thought it was expensive for what you got. 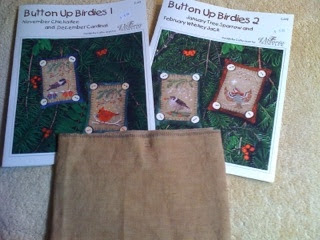 This is some lucious yarn - too bad you can't see the true color - it is MadelineTosh Pashmina for all you knitters out there. I have become a big fan of MT yarns - this is Norway Spruce and will be a cardi one day. I'm dying to start it but need to do a gauge swatch and so forth. 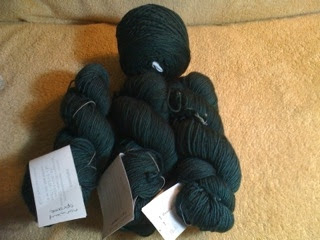 Hope to be back to visit blogland soon.  thanks for reading and following and commenting - I love to hear from you.
Posted by woolwoman at 4:55 PM 17 comments:

I mentioned in a blog post in December that DF Anne Marie had finished a beautiful Crayon box jacket for my mom.  She was also working on one for me - that was not a surprise since I supplied the yarn choices for both jackets.  It was a surprise that mine was completed so quickly - Anne Marie kept that a good secret.I thought it was better to display on the couch than on my blobby body so here it is !!!!!!!!!!  isn't it gorgeous? 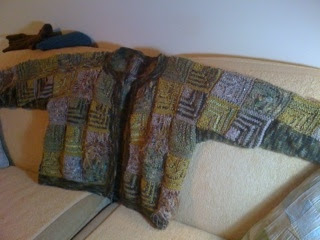 Here is a close up of how the mosiac squares look.  There are many different yarns used in this jacket however most of the base yarns are 3 colors of Jo Sharp Silkroad Aran for you knitters out there. 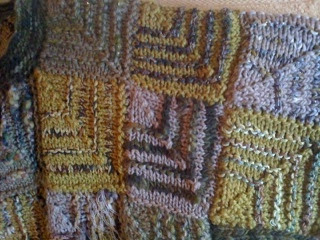 Next up is a shoulder warmer - I guess that is a more delicate term than "poncho" - if it looks huge - that's because it is huge - I did not figure adding a very fine mohair to the worsted weight wool would add that much bulk to the gauge but apparently it did.  It is not a fashion statement piece any how - just something to bump around in with jeans or wear at home if I am cold at night and believe me it is WARM. 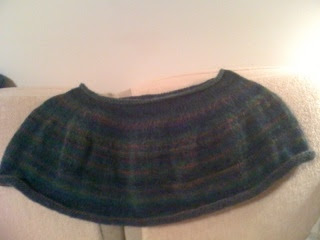 I started this last winter and of course put it away as spring wore on.  I didn't have much left to do when I picked it up again a few weeks ago - here is a closer shot that shows the halo of the mohair and the faint striping that was in the worsted base yarn.  the neckline and the bottom is supposed to roll like that just in case you were wondering. Since I'm all about staying warm these days - here is a WIP called Purl Ridge by Stephen West - a free pattern on Ravelry.  The yarn is some leftover Dream in Color I had - this is a long cowl that can be doubled around the neck for a snugger effect or just wear it hanging long.  It is a relaxing knit for the brain dead.  I hope to wear it this season - I am probably at least 1/2 way done with it. 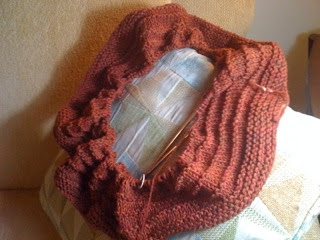 Please take note that neither of these projects I am working on were on the 11 in 2011 challenge list.  I just knew the 111 in 2011 would be a more realistic number for my short attention span.
I've been stitching about as much as I ever do - I am very pleased however that I managed to finish the January assignment for the Spanish Mystery sampler SAL with the Attic group.  This sampler is huge - sorry for the tiny shot but at least it will show that this sampler is GI GANTIMOUS. 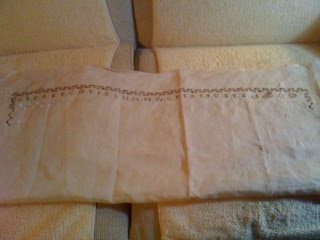 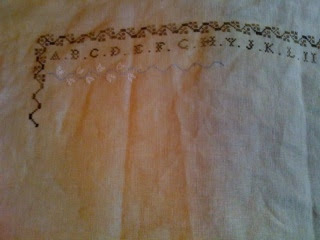 Here is a closer shot that does show February's band which thankfully has some blue and white in it.  this band gets boring quick as it is just the same thing over and over across that mile wide row.
I was feeling Valentiney as I usually do the week before and decided to pull out something reddish to stitch on.  I had started one of the Splendor pieces by Maureen Appleton a few months back but it is on 40ct over 2 (not over one as she suggests) and I quickly grew tired of struggling with the linen count.  I worked on it Sat and Sun night and have gotten fairly comfortable with the 40ct.  I'm sure I will grow tired of the pinky red I chose but for now - it is a nice diversion from the blue and white on the SAL piece.  If I continue to work on it and make decent progress I'll show a WIP next post.
That's about all my news -  seems like lots of stitching and handwork progress went on last week with all the stories of too much snow to venture out.  I hope everyone continues to make good progress but at least is able to venture out if they so desire.
Posted by woolwoman at 6:15 PM 20 comments: