OK - Obviously I've used that blog post title before because it auto-populated when I started typing it.
It is actually the title of a Momma's and Papa's song that I love.  I am probably dating myself but I can't help but feeling like California Dreamin' and Monday Monday were all from an easier time - a time when I didn't have to worry so much about things.  AHHH - guess I should never do a blog post when I am having a "blue" Monday !  I also like Manic Monday but I used that one before too !


One of my faithful blog followers asked what I had been up to - that I had not been around blogland lately.  Well I wish I had tons of stitching to show for my absence here but alas I do not.  I meant to get updated WIP photo of my Hart sampler but I keep forgetting - I always seem to be running late to work and that is when I seem to take all my blog photos because there is more light in my house in the morning. 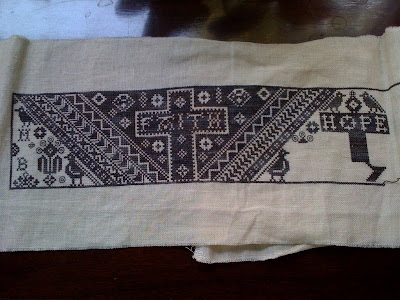 I do have a couple of photos to show - Here is a shot of Workbasket's Faith Hope Love - I have been working on it for several years (yes I said YEARS) - I don't know why I don't work on it more - I love the piece - DF Henri did this several years ago for a departing priest at her church and it was stunning - she inspired me to start it too.  Mine is on 36ct Lakeside vintage lentil in Belle Soie Noir.  I am just about at the 1/2 way point.  Maybe I should make this my "strand a day" project !
Here is a closer shot - I was afraid one skein of silk would not be enough and when I bought the 2nd skein it had a lot more light sections so I am pulling 1 strand from one skein and 1 strand from the 2nd skein to try and balance the difference and I think it is working out just fine. 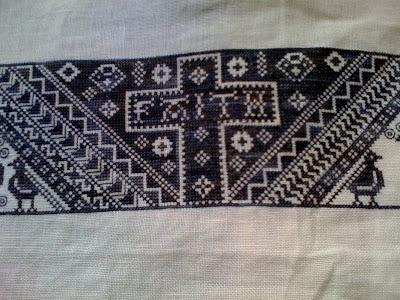 On Memorial Day weekend I was just dying to start something patriotic - I always want to stitch in the current season - christmas in December - a turkey on thanksgiving weekend and flags on the 4th of July!  I know - how do I ever expect to finish anything "for" the season - oh well - I really just don't care too much - whatever gives me joy at the time - it's all about the process for me - Am I having fun right now?  YEP - OK then it's all good !
I thought surely I had a BBD that would work for something patrotic when oh boy !  Look what I ran across - this is the America pillow by Handwork  - I had the lovely and cherished BOAF Sparrow linen in 36ct that Mary Riggs used in her model and it was done in GAST and WDW - I had all but 3 of them on hand so I could start it.  YIPPEE - I stitched like crazy on this for a week - that's about the length of my attention span on any given project.  I should have titled this blog post "true confessions" LOL - I have more done on it than the photo shows and since 4th of July is coming up - I have another patriotic holiday where I'll be wanting to stitch the red,white and blue ! 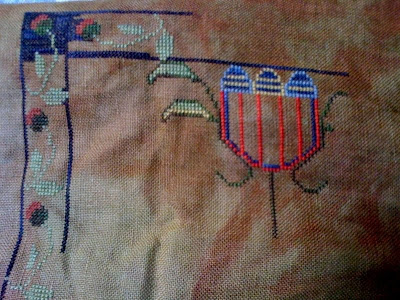 One last photo is the new start I made on the BBD Anniversaries of the Heart series.  I saw just one too many of these WIP's in blogland.  I am stitching mine on 30ct WDW Parchment using the recommended threads.  I wanted something big enough that I could maybe work on it at work  and not have to have additional light.  I am proud of what I have gotten done on it just working on it at work occasionally - 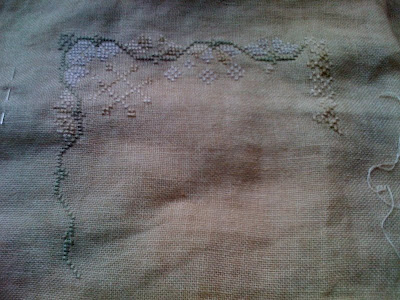 I'm not sure what that big pink hue is in the middle of the sampler - must be a reflection from the sun thru the glass or something because there is no pink hue on the linen.
Hope all my friends are doing well and staying cool - it's been horribly hot here in NE FL this past week.  Highs hovering around 100 and heat index well over 100 - damaging and severe thunderstorms every day last week and I hear it thundering now in the distance. Thanks for each of your comments on my blog - I read and appreciate hearing from you so much.
Posted by woolwoman at 3:46 PM 19 comments:

I've been promising for a while that I was very close to a major accomplishment in my rug hooking life.  My oldest (and dearest) WIP has reached a milestone.  I have completed the interior portion of the Antique Blue Basket.  For any rug hooking readers I have out there - it is designed by Edyth O'Neill of Red Cape rugs - it was color planned by Joan Reckwerdt and it is hooked predominately in a 6cut.  I did not like the backround Joanie sent me - it was almost white so a friend of mine that I have since lost touch with suggested tea dyeing the backround - that became an adventure since her husband passed away while she had my wool and I could not get in touch with her for almost a year - I kept hooking on the motifs but all the while worried about my 3 yards of backround wool.  My local teacher and DF Katie tried to duplicate the tea dyed sample I had been given for approval but to no avail - she tried every tea brand on the market and could NOT get the same effect - she even tried commercial  dyes and it did NOT work.  Finally after almost a year - the woman who had the bulk of my backround wool got in touch with me and of course I was not upset because it is a very traumatic event to lose your spouse but I was glad to see my wool again.  I think you'll agree  - it is a wonderful effect on the backround. 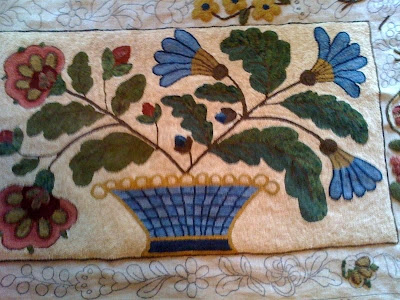 Sorry that shot is blurry and off kilter - I'll blame it on Jody - he took the picture because the rug is so big I could not get up over since I am so short.  I'll show some close up shots so you can see how pretty the colors are. 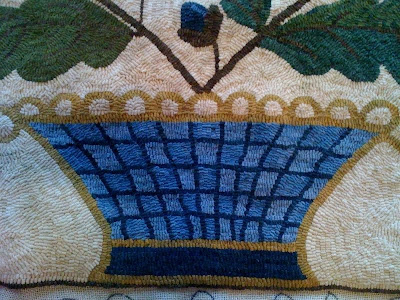 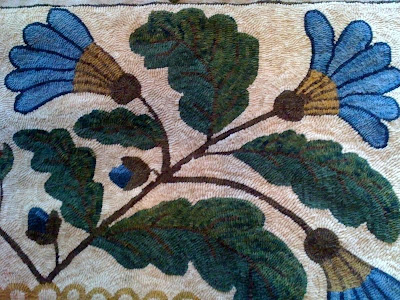 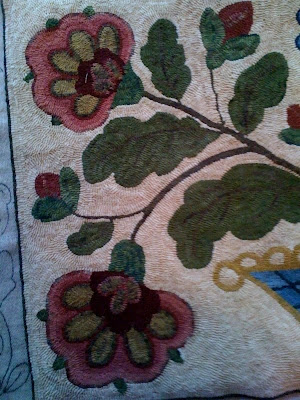 One last shot showing the borders - I have done only a small bit of the border - someone said along the line I shouldn't wait till the end to do the borders but I had left the backround till the end and I knew if I did not focus on getting that backround done it would not get done.  Bear in mind that this rug has sat sometimes for over a year or more without being touched.  I have started and finished many rugs in between starting this rug in the early 2000's - I'm just glad the main motif is done. 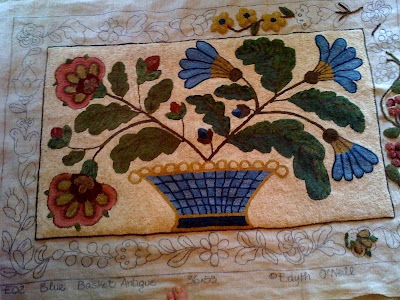 Somehow the photos do not show how large this rug is - it is 3 feet X almost 5 feet including the border.  I'm so proud to have just gotten this part done and I love how it came out.
Friday I took off from work - seems I needed to have an upper GI series done - YUCK - that was not too fun but not horrible either.  Since I also had fallen in the shower the previous Friday - I thought Jody and I should visit our DF who is a chiropractor in SO GA - we always love the drive up there - we travel the Woodpecker Trail - wonder how many of you have heard of that?  It's just State and County roads up thru Georgia - I think you can go all the way to the mountains on the Woodpecker trail - that's what my grandmother used to call that route back when I was a child.  It's nice to see it recognized as such with signage on the highway.  We decided that we would go and eat dinner at an obscure place called Blueberry Hill - So you start off in Hoboken Ga - does it sound like a wide spot in the road - yep it is - I think they have one red light and one gas station. Heading out of town - you see a tiny sign on a dirt road 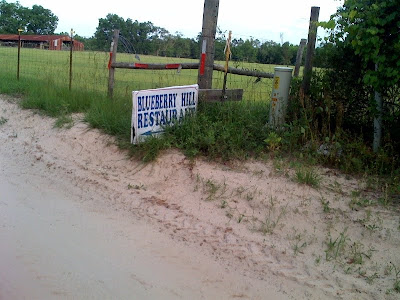 I had been to this place once before about 20 years ago but I was with our chiropractor friend and his wife (I used to show dogs with her for about 25 years) and it was dark and I thought they were taking me in the woods to dump my body - I NEVER again ventured to find this place on my own but Jody and I always try to make adventures when we can so obviously we found the right turn.  We drove about 2 miles on winding dirt roads passing by wonderful 100 year old farmsteads and barns 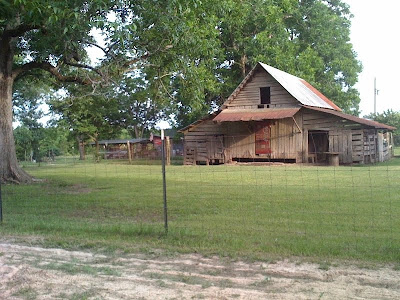 until finally we pulled up to a dead end and a long driveway - I don't remember seeing a sign at that point but we pulled in because there was a huge dirt and gravel empty spot that looked like maybe where people parked.  Here is the outside showing a huge wonderful fireplace 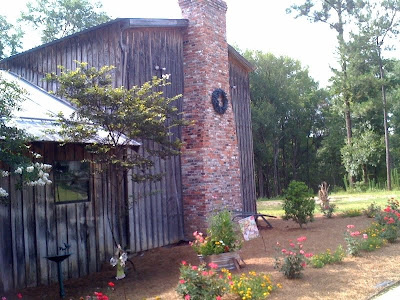 Up to the front door - what a neat rustic place 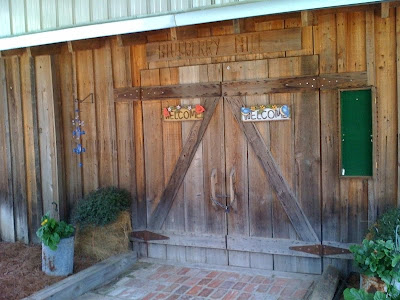 We got there at 5pm and we were the only ones there until after 6pm which was sorta odd for a Friday night - the place was huge inside - obviously they started out with a small wooden cabin type thing and just kept adding on.  We sat in the new part that had another awesome fire pit with a copper top on it. 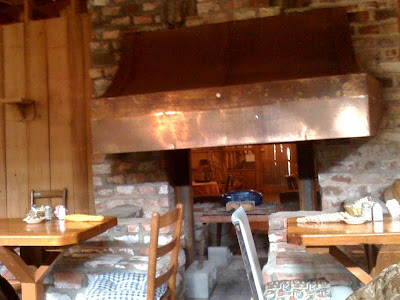 It was too dark inside and none of the other photos I took turned out but you can see nice shots of the view out the huge windows that our table overlooked if you look on their website.  It was a nice relaxing meal and then about 6pm - they had a piano player come in - he did real honky tonk style piano and so we enjoyed listening to him.  When we were leaving Jody went  up to put a tip in his jar and discovered he was blind - how amazing to be so talented and be blind.
On Saturday DF Linda took me to lunch at the Ritz Carlton on Amelia Island.  OH WOW - how plush it was - I had only been there once before many years prior for high tea.  It was such a nice day having a relaxing luxurious lunch and then a visit to the local needlepoint shop - NO  I did not buy a new canvas but did buy a few skeins of the new Vineyard Silk Shimmer.  I saw one canvas that could have definitely come home with me but with my stacks of wonderful canvases on hand - I did not dare to spend $200 for another canvas.  We headed back to Linda's house and stitched and chatted for a couple of hours.
So that concludes my weekend adventures - hope you enjoyed the trip !
Posted by woolwoman at 2:44 PM 21 comments: