IT WAS A DARK RAINY DREARY MONDAY

night when I got home from work.  Debby is knocking on our back door - we have been saturated with rain here in NE FL - about 6 inches in 24 hours.  It was one of those creepy nights when it wasn't quite dark - somewhere between dusk and dark when I got home.

I stumbled into the living room and AAAAACKKKKK -  imagine my surprise to see my Peaks Island Hood being modeled by our crystal skull. 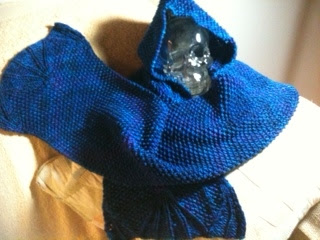 I think Jody thought this would be funny since I asked him yesterday to model this for me so I could take my photo for the Loopy Ewe camp loopy project. 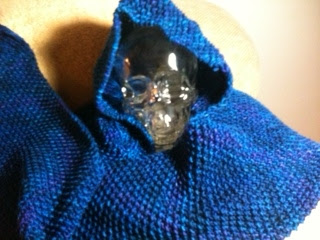 Hope you enjoyed my attempt at Hitchcock humor

Just back home from a short trip to Savannah.  Had a real interesting experience in one of my favorite restaurants down in the historic district.  Circa 1875 is on Whitaker Street just a block down from Paula Deen's Lady and Sons restaurant.  I love this place even though they have a somewhat limited menu that is french - it is just a quaint little cafe.

Jody and I were eating our soup and in walks an odd collection of about 6 people - they sat over by the wall just a table over from us and Jody was facing them and he all the sudden says - see that guy - that's Donal Logue - So who is that? well apparently he is an actor - jody knew him first from  a Northern Exposure episode but he had a sitcom of his own a few years back called Grounded for Life - then there was this guy with them who had a british accent but his back was to us and he looked like Eric Clapton at a glance and w/o my glasses LOL - Jody kept listening to him - and he said " I think that is that guy from the Harry Potter movies - but he didn't know his name - so when I got back to the hotel - we discovered he was referring to Alan Rickman - FIVE FEET FROM ME - Severus Snape - the Sheriff of Nottingham from the Robin Prince of Thieves Kevin Costner movie - Apparently Donal Logue parent's were Irish from County Kerry and that's what they were talking about. they weren't loud but we were THAT close that we could hear them.
You always think you will ask someone famous for an autograph but NOT - I would not have even been able to get the words out of my mouth. I did consider snapping a picture with my IPhone but I was afraid it would flash or something and I did not want to attract any attention. Anyway - if you google his name you will see they are starring and co-starring in a movie about a NYC club called CBGB or something like that. I think even Debra Harry and Patti Smith - is here for the filming - anyway - that's my big news.  It was very exciting to think that someone as famous as Alan Rickman of Harry Potter fame was close enough for me to hear him speak.  They were all very relaxed - having a nice evening out.  Filming starts Monday according to something I read from the Savannah News on the internet.

Not much stitching has been accomplished since my last post.  I am frantically trying to finish my Camp Loopy 1 project before the deadline next week.  I have finished the hood section on my Peaks Island Hood 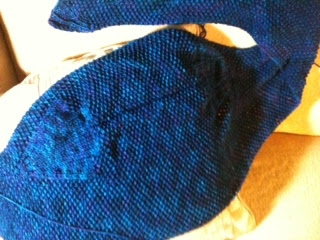 This very wide section is the hood portion.  It has been a very enjoyable project to knit - the yarn is exquisite both in texture, hand and finished fabric and the color is just stunning. 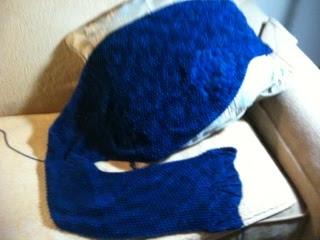 I am not really a blue person but this is just a smashing color.  I am in the home stretch now - I hope I can do some turbo knitting and get this finished photo'd and uploaded to the Loopy Ewe website before the deadline.   After all - Camp Loopy Two is starting and it is an even bigger challenge as the project has to be at least 800 yards and must have at least one color from your country's flag.  I chose red for my country's flag color. 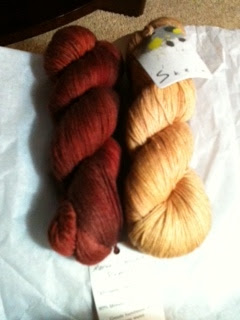 I've already received my yarn for the CL 2 project.  The good thing about these challenges is that Sheri at TLE offers a 20% discount on your yarn for these camp projects and extra little incentives if you finish on time.  I've selected Stripe Study as my CL2 project.  It is a shawl that lots of people have knitted in previous Loopy challenges and camp last year.  Another thing I try to do is use different yarns that are new to me.  This is Skein yarn which is an 80merino20cashmere blend dyed in Australia - it feels so yummy - I can't wait to get started with it.

But wait - there is yet even more knitting on the horizon for this summer - I have joined Wendy Knits Summer Soltice Mystery Shawl KAL. It has already started and I am sure I will be behind on this one but I purchased the pattern and will print all the updates and even if I knit it later and not with the KAL it is still fun to participate.

That's about all that's new with me - hope all of you are having a good summer so far.  I'd love to hear what you've been up to.  Thanks for popping by my blog and leaving your comment for me - I love reading them.
Posted by woolwoman at 2:23 PM 13 comments:

CAMPING AND AN OLD OBSESSION

Me - nah - I'm not the camping type - I need a/c, cable, nice restaurants, great light and a comfortable chair.  Now those big fancy motorhomes have all that but that's not really roughing it.
Camp Loopy 2012 is what I am talking about - I know at least a couple of my local friends and several blog friends are doing Camp Loopy.  Sheri the owner of The Loopy Ewe devised this cute way of having everyone participant in a group project last summer.  She gives a discount on yarn and little incentives for finishing on time and so forth.  It's fun - plus there is lots of campfire fun over on Ravelry.

I am doing a beautiful hooded scarf Peak Island Hood by Ysolda Teague a UK designer.  I am using hand dyed yarn from Three Irish Girls in an exquisite colorway called Niall.  I am enjoying knitting the well written pattern.  Thank goodness there are stretches of mindless knitting - I need that especially this week - I'm sorry but it has been the week from hell.  First Tropical Storm Beryl - dealing with the aftermath has been difficult for some residents of NE FL.  Thankfully we did not have any damage but a lot of cleanup of tree debris.  thanks to all my blog friends for sending comments and well wishes on that subject.  It was much appreciated. 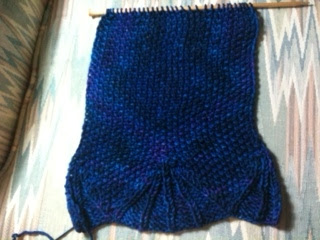 The old obsession part of the blog post title refers to my love of needlepoint.  I learned to needlepoint as a young girl - about 8yrs old.  It has been something I always go back to.  I've done lots of needlepoint classes incorporating fancy threads and intricate stitches but I think my favorite needlepoint is just classic designs like this one using beautiful wool or wool blend threads.  This canvas is using mostly Silk and Ivory a 50/50 merino silk blend. 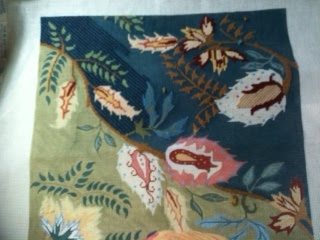 Here is a close up shot of the backround stitch for the blue.  I think this is going to be nice and I will do a different backround stitch on the yellow green portion - brick maybe.  Sorry this photo is not as crisp as I would like but you get the idea. 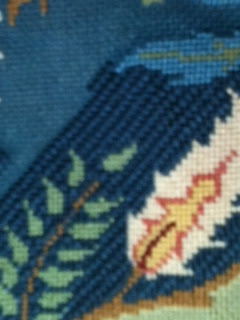 No I am not working this on any type of frame.  I'm sure most needlepointers would frown but I find holding a heavy frame to be tiresome and yes I have every type of frame and type of stand known to man - I just like to feel the project in my hands.  Just like with stitching on linen which I do 95% in hand.

Well the weekend is upon us.  What do you have planned?  I go to my EGA stitching group tomorrow but other than that - I am looking forward to a quiet relaxing weekend - after the week I've had with first the silly storm and then network problems for the past 36 hours - whew - I'm ready to chill out.  Enjoy !
Posted by woolwoman at 3:32 PM 12 comments: