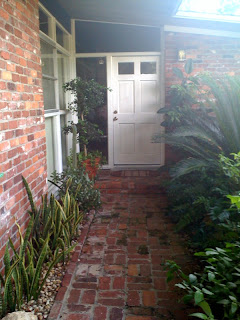 Well - we finally have a door after over 2 weeks with plywood standing between us and the elements. It is certainly not as pretty as our old door which had 9 panes of glass in the upper section of the door. It will just have to do. Apparently the more glass you have the more expensive the door so I had to opt for just a little glass. Doesn't really make a whole lot of difference as there is a whole glass wall right next to the front door. This craftsman house we live in has a lot of glass and wood which I love however when something like this happens - it does make you feel somewhat vulnerable.
Another blogger friend posted about losing their stitching mojo - I think I have lost all the wind in my sails too. I have done very little stitching and June is slipping away just like all my valued possessions did. I think maybe I have been sorta depressed - you just keep going as you do with any trauma in your life. This is not as serious as a death or accident, illness or other tragedy but to me it was a loss and a blow to my sense of security in my new home. We moved from a very bad area to an area that we thought was very safe. I had lived in the home my grandparents built since I was born - never in all those years - even in the recent years of decline in that area were we ever broken into. Of course there is always a first time and I am still glad we left that area.
Oh I've stitched a little this month but not enough to show WIP photos - I am almost finished with the wording on the A&E by Primitive Needle, am working on the fill in on the top border of Where the Hart Lives by SL and have hardly touched Shores of HRH. I did start the quaker SAL Mary Wigham but barely enough to say I started.
Hooking progress is even worse - nothing to talk about there - it's been dreadfully hot here in NE Florida - I mean record highs HOT - it was 100+ over the weekend with a heat index of about 110+ - I'm sure my Arizona friends will scoff and laugh but that is hot for June in NE FL. So sitting under a wool rug doesn't seem too appealing at the present time. I do have rug guild this coming weekend so I will find a "not so big" rug to work on there.
Knitting WIP;s are in about the same sad state - I have some mindless knitting next to my chair and I may do a few rows on one of the shawls that don't require a pattern to keep track of but that is about it.
Thanks for all the kind words on my last post. It really helps to know that you have friends out there who do care what you are going thru. So - I'm going to close my new door on the feelings of resentment and anger and go and hunt for my stitching mojo - be back with you soon and some WIP photos - I promise!
Posted by woolwoman at 3:28 PM 11 comments:

One week ago today I got a frantic phone call from Jody saying our house had been broken into and ransacked. I was in St Augustine at the time with my folks about to go out and have a nice dinner . I was twice as far away from the house as if I had been at the office so it was a very long ride home.

Once I arrived there - it was shocking to see what they had done to my beautiful front door. We live in a craftman home with lots of glass and wood and the front entry way was completely demolished. I had 9 panes of glass in the upper portion of the door - apparently they first broke that and tried to reach in and open the door but our dead bolt opens with a key so then they started trying to pry open the dead bolt which never did give away so apparently they started kicking or ramming the bottom section of the door until it gave away and they were able to crawl in thru the bottom of the door.

Every drawer in my house was turned out into the floor - the master was a complete wreck - they took all my gold jewelry, lots of silver jewelry, my sony cyber shot, 2 handguns, 5 expensive purses (coach, dooney Brahmin) and loaded it all into my Samsonite pull piece of luggage and took off out the kitchen door. I live in an area where I am surrounded by retirees - no one said they saw or heard anything at all. According to the detective - it is a ring of thieves that has been hitting that area and doing this smash and grab.

We now have an alarm system in the house which give some slight peace of mind.

It is a really creepy feeling to know that someone was watching your house, watching when you were home, what you drove, when you came and went and so forth. I'm just thankful they did not do any malicious destruction like overrun toliets, squirt ketchup on the walls or worse yet my hooked rugs. Funny thing - they did not take any electronics other than the camera - I think they must have been scared off. I am so extremely thankful Jody did not walk in on them and possibly get shot with our own gun.

So - that is why I've been out of touch for the past week. To have your space invaded like this is very disconcerting - I did start Mary Wigham last night while my folks were there spending the night. I guess my subconscious was relaxed enough about being protected by my dad's 357 that I could focus on stitching a little bit. Other than that - I have not gotten much accomplished in the past week.

Not sure when I'll be able to show photos again - I have a new IPhone and maybe I can do some photos from that and download to my webshots.

Just wanted to update my friends on the details of the break in. Be safe everyone !
Posted by woolwoman at 3:16 PM 18 comments: