Hello everyone !  Had to hurry with a post or July 2010 would be gone.  I have been mostly stitching but don't have any photos to show for my efforts.  I am taking a class at a shop next weekend that I have never visited before about 2 hours south of me.  It is a Hem Stitch Sampler class by Indigo Rose - I have been working on pre-stitching for that.  I've made good progress and I'm quite proud of that.  I have not been to a class in a very long time so I am looking forward to a fun day in a new to me shop.  DF Linda is going with me to the class and we will be meeting DF Carol.  Both of these gals are in sampler guild with me and Carol and I have traveled together on many awesome trips so it will be a wonderful day spent in historic Mt Dora which is west of Orlando.

The other fun trip I have coming right up is a concert by  ROBERT PLANT - WHEEEEEE - Jody and I are heading to Clearwater on the gulf coast of Florida to see Robert on tour with  his new venture band of joy.  Apparently there are some guys in this group that he played with in pre-Zeppelin days.  I was not familiar with them but anything Robert does is gold in my book.  I did not see the acclaimed Raising Sand tour with Allison Krause.  The closest concert to us was Birmingham AL and that is about 9 hrs so we decided to skip it.  So the last time I saw Robert was in NYC about 5 years ago.  What a trip that was with BFF Jill - will never forget the excitement of being in NYC and seeing Robert Plant at the Beacon Theatre.  So - a weekend away sounds great.  I've mapped out a scenic route thru the center of the state - we'll stay off I 75 and go thru horse country.  On the way home we'll travel back up the gulf coast and might stop at Homosassa Springs to see the Manatee exhibit.  I've never been in that area of the state before and I never pass up an opportunity to do something I've never done before.

Last Saturday the Azalea Sampler Guild got together for our monthly stitch in.  There were lots of gorgeous projects in progress.  I wanted to show you the work of the talented and dedicated stitchers in our group.  My apologies to Jill and Henri - for some reason the photos taken on your side of the table were too dark to put up on the blog.  Henri finished her beautiful Hannah Horsfall quaker which was repro'd by another guild member Karen of the Spinning Monkey.  Then Jill had a new start on a quaker which is to be a purse insert - I think it was Quaker and Crown but I'm not very sure I have that correct.

So here is the show: 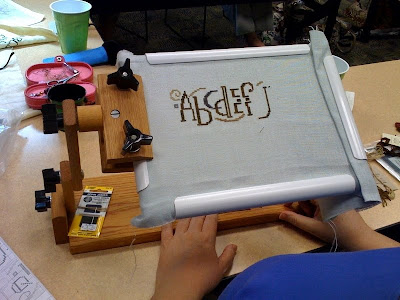 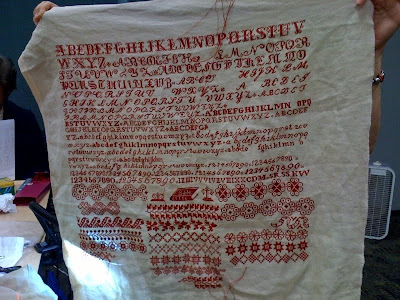 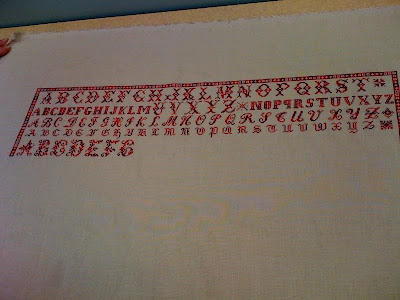 Another red beauty by Linda the french sampler Marie Lucie - I think she said the linen was graziano in 38ct and the red is overdyed cotton by Threadworx. 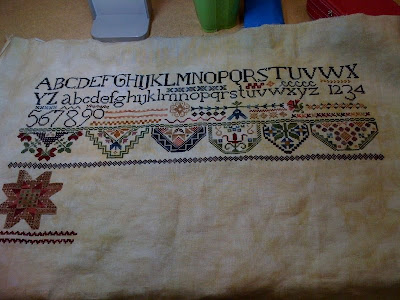 Jackie's beautiful Quilts and Quakers - the colors are just my style and the linen is PTP Mello and the called for Valdani overdyed cottons. 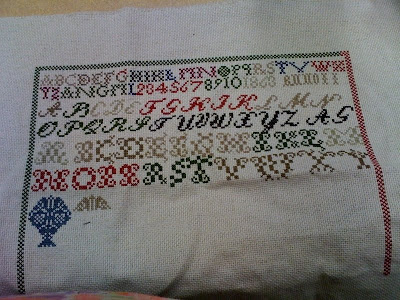 Mom is rocking along on her Vierlande which was in SANQ a couple of issues ago - this was supposed to be a guild SAL and Henri has finished hers.  Mom should be closing in on a finish in the next month or so.  I have two rows of alphabet but that is it.  Not sure who else is stitching this but I'll show more progress when I see them. 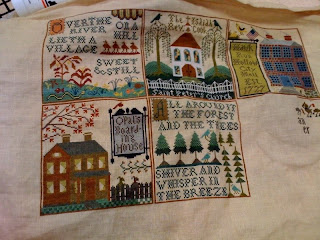 last but certainly not least is Kris' gorgeous Villages of HRH.  These pieces always blow me away in person.  They are so gorgeous.  This is on 40ct Lakeside - not sure of the color with the called for NPI I think.
And where is Mel's progress?????????  Well - I just don't have enough of that Hem Stitch sampler to show at this time.  After my class - I promise I'll show you what I've been doing.  I am also working SLOWLY
on the BBD AoTH - still on Snow Garden.  However I am making a little progress here and there.
Knitting hummm - I'm always knitting - working mainly on two summery jackets - on a moss stitch jacket by Debbie Bliss in her summer yarn Amalfi - very pretty - I think I showed the yarn earlier this summer in one of those Savannah stash hauls.  the other focus garment is the tea party cardi which I am knitting for a good friend using Spud and Chloe 50/50 organic wool/cotton - a lovely yarn in a bluish teal.  I'm itching to start another shawl - I have several in mind but mainly Seraphim.
I hope to come back to visit real soon.  As always - I look forward to your blogs and your comments on my blog.
Posted by woolwoman at 1:22 PM 16 comments:

Hope you all had a fabulous 4th of July !  Many people are off today on the 5th - however I am working today.  So I thought I'd pop in and say hello and show you some photos of where we spent our 4th holiday.

My folks live on a beautiful lake about 50 miles south of us.  It is so pleasant down there - fun to perch on their porch high above the lake and watch the boats pulling skiers and hear the constant drone of the jet skis.  they always have a great fireworks display - a neighbor of my parents pulls a float out in the lake and sets off about 15 minutes of fireworks - nothing to compare to NYC or the Capital celebration but fireworks over water are gorgeous no matter where you happen to be.  We prepared all our side dishes on Saturday so we could sit on the porch and stitch all afternoon.  We were blessed with cool breezes and temps only in the 80's which made a pleasant afternoon.  Here are a few shots of the lake from our vantage point. 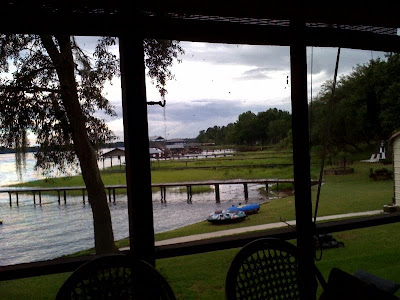 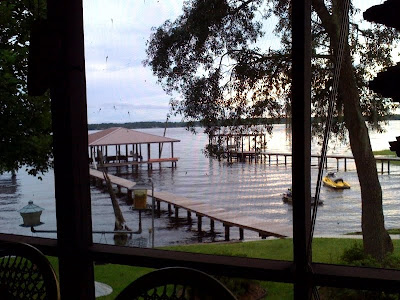 Here's my dad putting out a woodpecker cake - I love watching all the birds come to their feeding station. 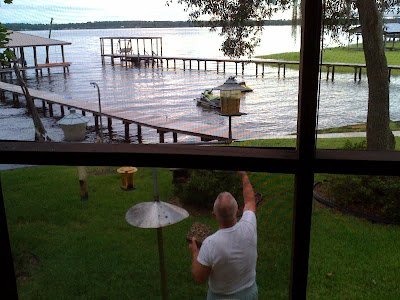 Here is a shot of mom stitching - not sure why it came out like this but it was interesting. 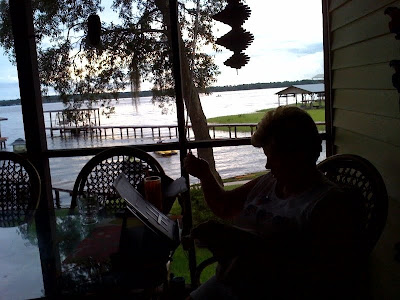 Jody relaxing and enjoying the view 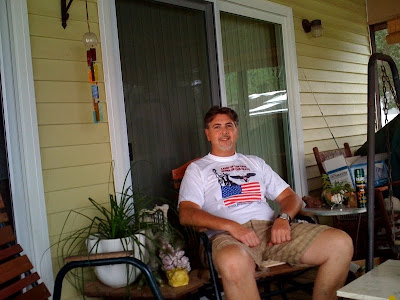 I was going to show some shots of our stitching but the lighting was just not that great so I'll just make this post about our little family 4th of July celebration.  It's times like these to be cherished and enjoyed.
A couple of stunning shots of the sunset to close this post 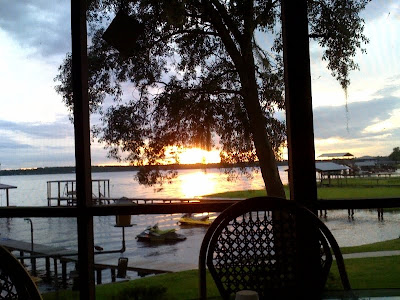 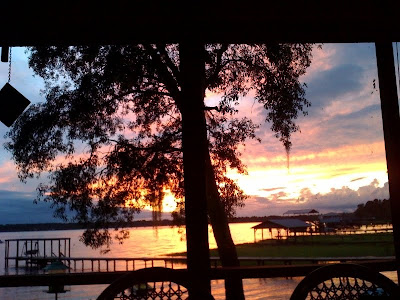