I couldn't decide what to title this last post for January 2014 - Many of you have had horrible winter weather to deal with in January 2014 - it will be remembered for a long time in the deep south where I live.  There was no actual horrific conditions to deal with here in NE FL but just slightly to the north and I mean mere miles away - there was sleet, ice and some snow.  Schools and businesses were closed and I'm sure those of you who live in true winter conditions all the time will be amused to hear snow flurries and a little sleet will close schools and businesses but indeed folks it does.  Take the debacle in Atlanta as an example.

Oh well - on to the fun stuff - Wintertime for me equals lots of rug hooking.  Off the Ocean 2014 has come and gone.  This workshop was smaller than usual but we had the same amount of fun.  I was honored along with 3 teachers and 4 other students for having attended all 15 years.  We were given a beautiful "Relic" silver pendant with our initial on it by the directors and DF/s mother and daughter team Judy Colley and Katie Puckett.  I'll try to remember to show a photo of the pendant next time.

BTW - I will be forever grateful to my blog friend Ann over at Dolls Musings for cluing me in to Picasa Web Albums - Gees - I am now able to upload my photos with ease - Thanks Ann!

The photos aren't that great because they were all shot with my Iphone and sometimes the angle was not good - the patterned carpet is always a detractor from the beauty of the rugs, best I can do folks.  As always there was a bevy of beautiful rugs in the show.  This is not all of them so if I missed your rug - please don't be offended - sometimes people were standing in the way for a long time and I had to move on.  A couple of the shots were awful and could not be published.

First up is this one called Ocean Beauty - I remember that because this woman was in my class.  It won a prize in the exhibit - 3rd place maybe - I don't remember all the placements.

Some of the rugs I don't know anything about and I will not comment unless I do.

This rug won a prize in the wide cut category.  A rug canvas designed by Bev Conway

This rug was hooked by a charter member of our local rug guild and it won a prize - 2nd place I think in the wide cut category.  It's the Button Basket by Holly Hill Designs

The snowman chair seat was designed by DF Katie Puckett and hooked by another DF and guild member Suzy S.

I'm pretty positive this was hooked by my teacher Sibyl Osicka - she does magnificent realistic animals in a 3 cut.

\
My scarecrow rug got a little lost in the carpet patterning.  This is a design by Bev Conway and is called Pumpkin Patch.  Most of the wool was from Bev but I arranged the color plan myself.

Another huge rug - hooked in a 3 cut by a woman in my class, Sibyl was the designer of the rug and also the teacher if I am not mistaken and this rug I think was 3rd place in the fine shading category.  Just goes to show the depth of quality at this exhibit.

Hard to tell but this was a stool - very cute design!

More rugs hooked by Sibyl Osicka - you can visit her at www.sibylosicka.com

The gorgeous geisha girl was also Sibyls - a woman in our class was hooking one very similar.  What a challenge.

Here is my new rug I started with Sibyl - it is a crewel pattern by the late great Jane Olson called Dowry.

Doesn't look like much for 4 days of hooking but I didn't hook any late nights this year.  My mommy wasn't able to be at rug camp with me this year and my whole karma was off without my pal.

I think this red flower was my best effort on the rug and that was the first one I did.  Fine shading with a 3 cut requires a lot of thought and a lot of time just looking and staring to make sure you are getting it right - it also requires some pull out in some cases.

As you can see - Sibyl wanted to move me around the entire rug and see if I could get a little bit of each motif in while at class.  The very dark brown looking wool in this shot is my backround.  I would call it Oxblood - it is a very very dark maroon.
It was a great experience to be in Sibyls class this year.  I usually put away my camp project and go back to another rug which is closer to completion.  I have a very big rug at home from many camps ago that is sooooo close to being finished so I will continue to work on that one however - I believe I might try and work on Dowry from time to time just so I can see some forward progress on it and keep the shading concept fresh in my mind.
Yes there has been some stitching and knitting going on but this post is all about the wool so I'll save that for a February post.  Until then - with warm and wooley-thoughts ~ ~ ~
Posted by woolwoman at 3:11 PM 10 comments:

Labels: Off the Ocean, Sibyl Osicka

CONFESSIONS OF A FIBER HOARDER

Lots of people at our EGA chapter meeting yesterday were talking about cleaning out, organizing and donating stuff, going thru WIP's and UFOs and I guess that is normal for most people to look at how they can meet goals for their needlework in the new year.

Me - nah !  I have a very project oriented job as an IT director and I don't do "goals" in my needlework life.  I just float thru doing exactly what I want to do when I want to do it.  I do like to challenge myself and I had fun doing that last year with an online shop I like called The Loopy Ewe - they have challenges all thru the year to keep knitters motivated and in my last post I showed a lot of knitting projects I finished - I was happy with the results.

Stitching - ahhhhh - not so much accomplished last year - maybe this year will be better.

I am also going to make an effort to post more to my blog and maybe just not wait to have big finishes but just pop in with a few photos more frequently.  Today is one of those days.  I just wanted to pop in with a new years post - say hello and thank all my blog followers - tell each of you how much I appreciate your support and comments thru the year.  I've been blogging for a long time and I still find it rewarding - more intimate than FB which scares me somewhat and I don't know why.

Anyway - I finished a beautiful knitted hat in late December but I just couldn't get a good photo of it at night in my house so today I snapped a decent photo of it. 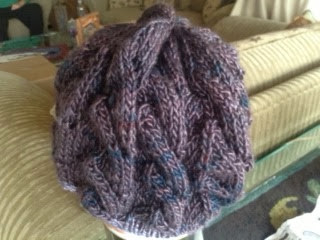 This is knit with Louisa Harding Grace Hand dyed which is a 50/50 silk merino and now discontinued.  I fought with the yarn in the beginning but liked the finished hat so much I ordered some more off ebay. 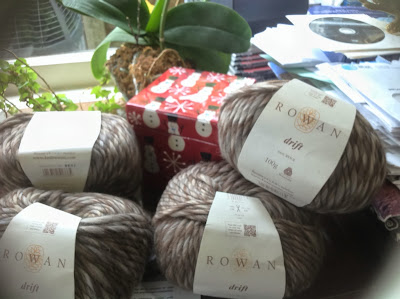 More woolly goodies came in the mail - this is chunky yarn Rowan Drift which will become a vest I hope.  I could use it now with this arctic blast coming our way.  Funny but today it's going to be almost 70 here in the deep south - hard to believe it is going to plummet to 18 on Tues morning.  I know some of you are scoffing at this comment but remember our homes here are not built to withstand those temps.  We have rooms with entire walls of glass and in our master bedroom it feels like you are outside when it is that cold.  No way can our house be heated in 18 degrees so all the wool will be coming out to keep us warm. 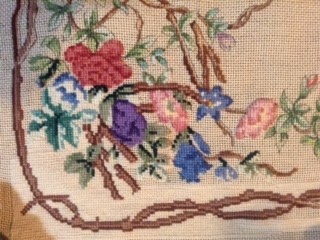 Plundering the stash last night - when a visit to my beautiful antique needlepoint rug canvas was in order.  I don't work on it very often anymore - actually - I bought this rug from the former owner of our LNS many years ago before I started rug hooking.  She got it from a friend of hers who was a long time needlepointer and shop owner in New England and had a vast stash of personal treasures.  Upon her passing away her daughter was so overwhelmed with her stash she started calling everyone in her mothers phone book to see if they wanted to purchase any of her beloved stash.  That is how my friend got this canvas.  She let me look thru what she had obtained and I was so taken with this canvas.  She figured based on the linen and style that the rug was at least 50 years old at that point and that was at least 15 years ago that I purchased the canvas.

I collected the Appleton Tapestry wool over a few months time making frequent trips to a shop in St Simons Island Ga that actually carried this beautiful yarn.   Sadly that shop is gone now. 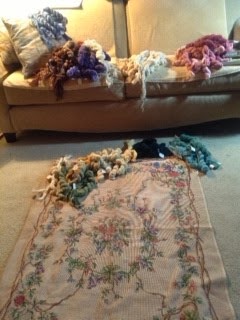 This is a large rug - it is on linen backing and was line drawn and then painted on the canvas. 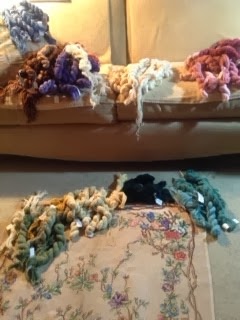 I think I have 100 skeins or more of the tapestry yarn.  You can't see from the photo above but it is being worked in a cross stitch because 1 strand of tapestry didn't cover the canvas and we decided that it was less expensive to do a cross stitch than to have to use a double strand of tapestry wool.
It is a project I will probably never finish in my lifetime because when I want to work on big huge rugs - I am usually hooking them not needlepointing them.  However when it is very cold - I always gravitate towards this project.  It is warm on my lap and covers me up while I'm working on it.
OK who's ready for the Downton Abbey season premiere tonight ME ME ME !!!!!!!!!  Another shop I like Jimmy Beans Wool is doing  a Downton KAL with a specially dyed colorway called Bated Breath - HA - it is a manly type of color and I didn't order it but I think I will pull out my Christmas at Downton a special colorway dyed last year for this same KAL by Lornas Laces. I'd like to start a new shawl which I will work on each work during the show.  Since I always have startitis big time in January - what the heck !!!  what's another project on the plate.
Now I must rush off to peruse my RAV library and find a shawl pattern to use.
Hope you are all happy with the start of the new year.  Friends in the cold country please be safe.  Sending you warm and wooly-thoughts !
Posted by woolwoman at 2:22 PM 9 comments: