A TASTE OF FALL

Well friends - I am just back from 10 days off work  - it was a great vacation.  We spent 8 days in the Smokie Mountains in Tenn.  We we first arrived Labor Day weekend it was sweltering there - I think it was 98 even hotter than when we left FL.  I have loads of family type photos so if you want to skip to the stitchy stuff - feel free to do so.

My folks went up a few days earlier than we did but we have shared a condo space for the past couple of years at this same complex and that worked out well. We both have our own vehicle in case too much togetherness begins to creep into our space. We all get along very well and we have our own bedroom and bath so it works for us. 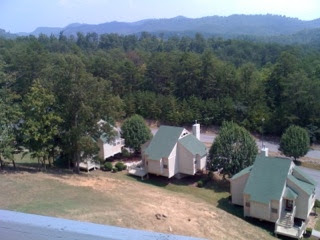 Here is a shot from the balcony and down below is the cottage we stayed in last year.  they were nice but NO view at all so we preferred to be in the tower. 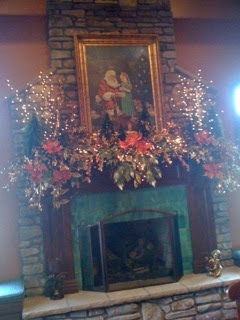 If you have been to Pigeon Forge Tenn - you are familar with the Christmas Store and maybe the Christmas Inn owned by the same folks.  Well now they have the Partrige and Pear restaurant.  We went there for dinner last year but Mom found they were open for lunch so that was our first stop on Saturday.  Here is a shot of their beautiful mantel.  The entire restaurant is decorated for Christmas year round.  there is a neat photo of my folks and Jody with Santa but it got out of order and I can't seem to fix it. 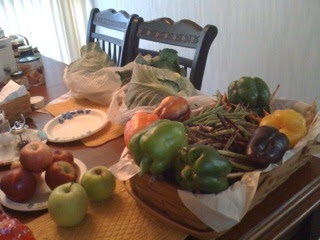 This is a shot of the haul from the farm stand in the No Ga mountains on the way home.  This Longaberger gathering basket is running over with 3 kinds of beans and peas and bell peppers - Have you ever seen a purple bell pepper - I haven't - so there is one in there that is purple.  Fresh apples and see the huge heads of cabbage just cut from the field.  One variety of peas was so fresh - it still had the morning dew on it when the box was dumped into the bin - oh and the fresh corn too that did not get into the shot. 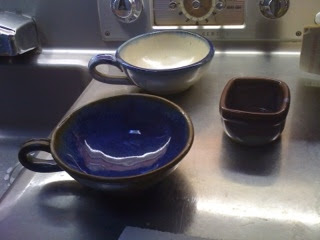 I love pottery.  These 2 soup bowls and a little container for sweetner packets are from the Pigeon River Pottery.  They have so many gorgeous pieces both decorative and utilitarian. 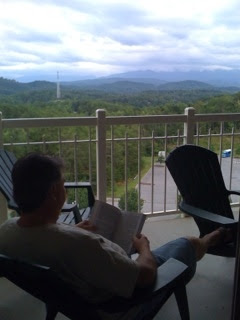 Here is a shot of Jody on our favorite perch.  We did not get to enjoy the balcony as much as we had hoped to. The view of the Smokie mountain range is incredible. We had 3 days of rain and dreary weather when the effects of Lee headed up our way.  Thankfully we did not get any of the horrible flooding issues that folks up north got.  How sad they got both Irene and Lee - it has been a dramatic and odd storm season and not to minimize the pain and suffering and loss of property and disruption to their lives but I surely hope we don't get any storms in NE FL this year. 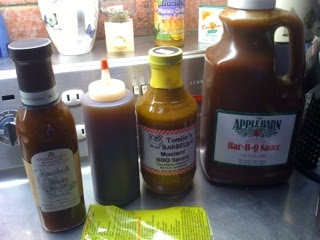 We enjoy collecting BBQ sauce too - not just collecting - we use it - See that 1/2 gallon jug of Applewood Farm BBQ sauce YEEHAW - we were thrilled to see it put up in this quantity - we usually have to buy 16oz bottles and hope they last thru the year.  We got Tomlinson's mustard last year and it is unique.  The no name bottle came from a backwoods BBQ Shack (yes that's the name) in Toccoa GA - on the edge of the mountains - the food was great and their sauce was interesting. 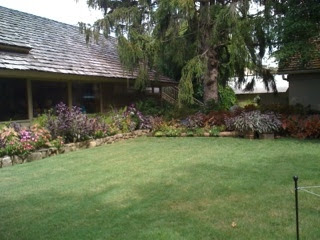 This is just outside the Pigeon Forge Pottery - every where you look in the Old Mill complex the flowers and beds are gorgeous. 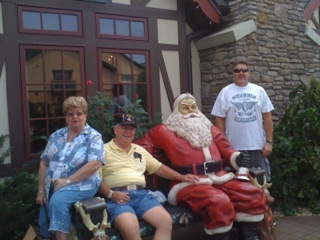 Here's the Santa shot outside the Partridge and Pear. 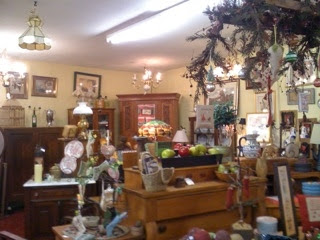 The highlight of the trip for me was visiting 3 Sisters Antiques and Needlework in Knoxville Tenn.  I was excited to finally be able to visit the shop - it definitely did not disappoint.  Deb the owner said they had a webpage but I have never been able to find it so I can't provide a link to it.  They have some awesome antique pieces and while the stitching stuff is contained to one room - it is nicely interspersed with the antiques and collectibles. 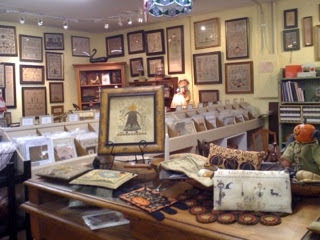 I consider myself to be a pretty savvy sampler shopper but Deb had a few things on her walls I have never seen.  I did not get any photos of my mom perusing around but believe me she was busy collecting her own stash haul. Mom got the new Needlework Press chart called How does your Garden Grow and made her first foray into Belle Soie silks. 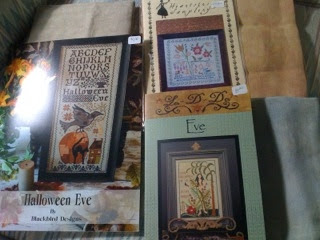 Here are the 3 charts and linen I got.  I knew I wanted the BBD Halloween Eve and was delighted it was in stock along with the called for confederate gray linen.  Apparently I missed Eve by La D Da when it came out in 2004 or maybe that was before the A&E craze hit.  Anyway she had a shop model and it is too cute and I found a great Silkweaver linen called Rock Quarry that seemed to go nicely with the silk colors.
Heartstring Samplery was new to me.  They had this model on the wall too and stitched on this gorgeous Silkweaver linen called cinnamon ? something I can't remember but it was just too beautiful not to get some and I love the sampler. 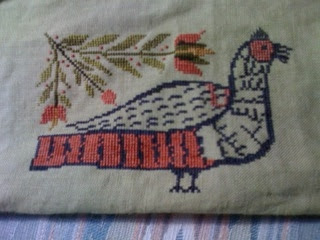 Mom and I were supposed to be stitching Halloween pieces on this trip and I did bring along All Hallows Eve by Chessie & Me but the over 1 alphabet got to me right away.  I did not have anything but my tabletop OTT light and no extra magnification other than my prescription glasses - so I just could not work the over one when not at home so fortunately I brought along my BBD Partridge.  I got tons done on him. 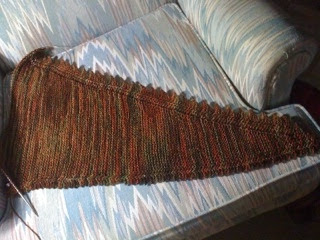 The other project that captured my attention was this shawlette pattern which I downloaded off RAV - it is called Tanta and it is by Emily Ross - it has a very cool sawtooth border on each edge of the shawl.  For any knitters out there - it is done in Malabrigo Sock and the Arbol colorway.  That is my "taste of fall".  I figure I am about 1/2 way done. 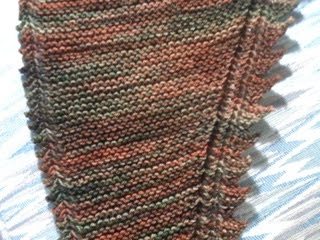 Here is a close up shot that shows the beautiful fallish colors of this colorway and better detail of the sawtooth border.  I could see myself doing this same pattern again - it is an 8 row repeat and has just enough variety to be interesting but not enough to require your full attention.
That about concludes my "taste of fall" tour.  We were delighted that Lee did bring much cooler weather to our vacation spot.  All week last week it was in the 50's at night and in the 70's during the day - it was glorious to be cool again after such a long hot summer.  The minute we left the mountains on our way home on Saturday - it was roll up the windows - close the sun roof and turn on the A/C - oh well - at least we had a preview of what's coming to us within the next few weeks.
Posted by woolwoman at 6:28 PM 10 comments: