IT'S ALL ABOUT THE KNITTING

Fall and winter is when I really immerse myself into all things wool.  Wool rug hooking and knitting take up most of my free time.  I adore them both and typically I knit almost every night especially in the winter.  During the very hot summer months in NE FL - I sometimes have to forfeit my knitting in lieu of less sweltering activities like stitching.

I am excited to say I have a finish.  I have been working on a lovely baby afghan for DF Betsy's first grandchild from her only child.  Daughter Camille (fondly known as Bunny) is due in early March.  I am ecstatic that I finished the afghan ahead of the birth. 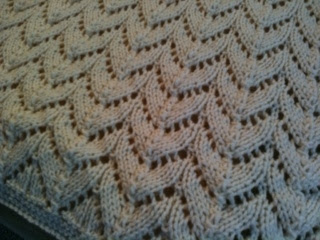 For any knitters out there - this is a Madeline Tosh pattern called Heirloom and it is an easy 8 row repeat. 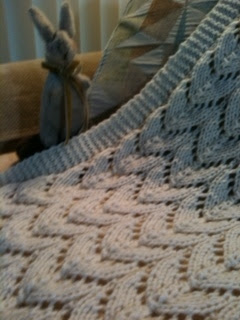 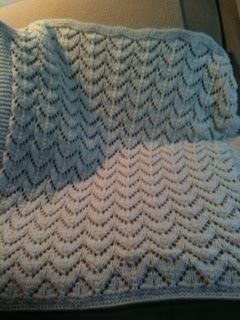 I used Spud and Chloe Sweater in color Ice Cream - the Sweater is a worsted weight 55% wool/45%organic cotton yarn and a dream to work with. 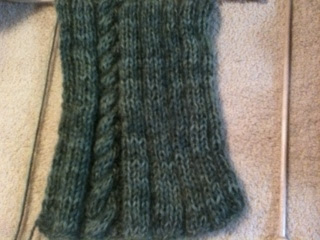 Next on the focus list is the First Quarter Challenge project with the Loopy Ewe.  This is Elinor by ShibuiKnits - the pattern is for a cable rib scarf by Shibui and the yarn is Shibui Silk Cloud one strand with one strand of the gorgeous Shibui Baby Alpaca which is a worsted weight.  This yarn combo is absolutely heavenly to knit with and the color is greener than it looks in the photo. 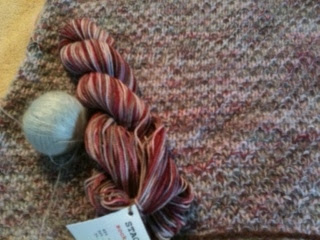 The next project I am almost done with is also a Shibui pattern called Eustrucia or something like that out of the Shibui Luxury book.  It is a huge long cowl that is crossed over after finishing and then connected to form a big loop. 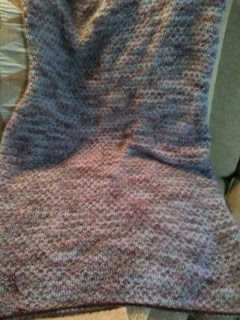 Another exquisite Shibui yarn combo - this was my first taste of Shibui luxury and I don't think I can go back.  This is 2 stands of Silk Cloud with one strand of Shibui Staccato which is their luxury fingering weight made of wool and silk.  What better combo and soft is putting it mildly - it is a luxurious fabric.  The colorway is called Poodle Skirt so on Ravelry - it is called Pink Poodle Skirt Cowl.
Well friends - I hope I didn't bore all my stitching friends to death with my knitting projects and progress.  I hope to have another post soon to show what little progress I have made on the Ann Dale SAL with my local sampler guild.   Hopefully I can spend a little more time with Ann now that the pressure to get that baby afghan is crossed off my project list.
Thanks for visiting my blog - I love reading your comments and hearing from you
I hope everyone has a marvelous weekend with plenty of time to do your favorite needling.
Posted by woolwoman at 12:51 PM 16 comments:

OFF THE OCEAN RUG EXHIBIT

Can't believe 2 plus weeks have flown by since OTO 2012 ended. I promised to show you photos from the rug exhibit. PLEASE do not be offended if I did not show a photo of your rug or if I don't remember who hooked certain rugs. I don't make notes - I am not a professional photographer - these were taken in a big hurry with my IPhone in between people who are all trying to see and photo the rugs. If I don't comment about the rug - it is just because I don't remember who hooked it - they are beautiful one and all and have many hours hooked with love. 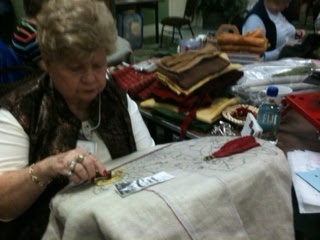 Here is a shot of my DM hard at work on her new Poinsettia christmas rug.  She does not typically do a fine cut but she was doing an awesome job and enjoying the color plan our teacher Dianne Kelly did for her.  Way to go Mom ! 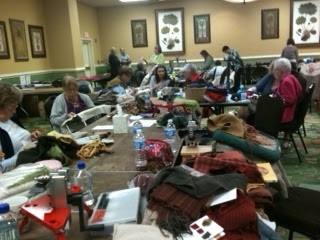 In the front right of the photo is my pile of wool - hard to believe my beautiful santa and ewe came out of that pile of wool.  Some hookers are neat freaks - apparently I am not LOL ! 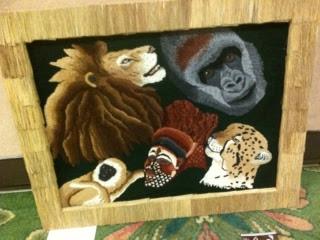 On to the exhibit - here is a stunning rug by one of the teachers Sybil Osika.  Her animals are so realistic. 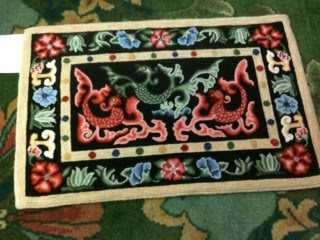 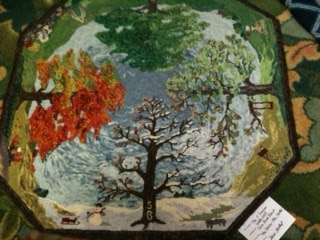 This was the Best in Show winner for wide cuts - it is called 4 Seasons and was by Sara Beth Black from NC.  I believe Diane Stoffel assisted with the color plan and possibly supplied some of the wool for this stunning rug. 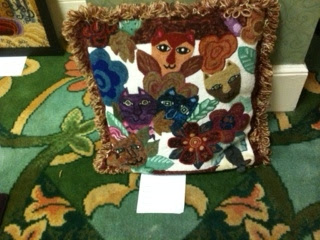 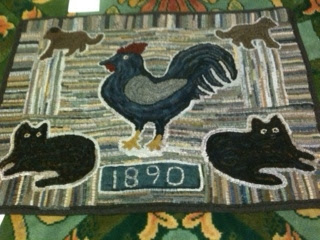 This was hooked by DF Susan Morin and started at last years OTO with Bev Conway.  I believe most of these wools were from the creative mind of Susan.  She does awesome prims. 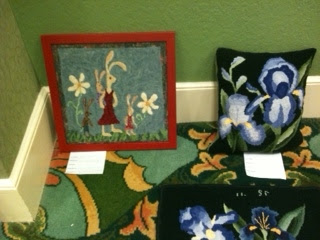 Here is my Hare family all framed up.  It was gifted to my DF Anne Marie and she wanted to have it framed. The design was adapted (with permission) from Hare Easter a cross stitch freebie by Paulette Stewart of Plum Street Samplers. Next door is a lovely iris but I don't know the hooker on that one. 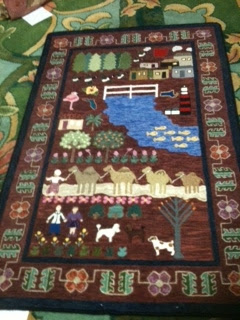 This was a story rug of sorts - don't know the details of it but I overheard that being said. 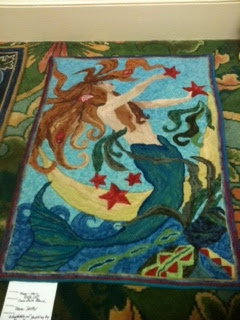 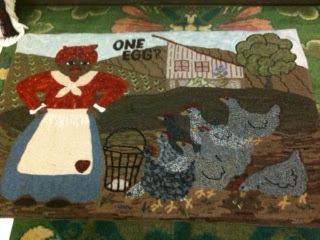 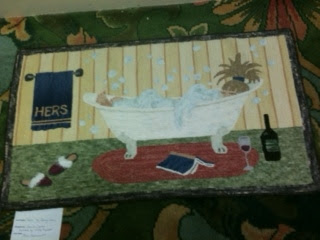 The bathtub girl was hooked by DF Sharon Carter who is also a fellow guild member.  She started this at a previous camp with Joan Reckwerdt.  Love the wallpaper - so many cute things about this rug ! 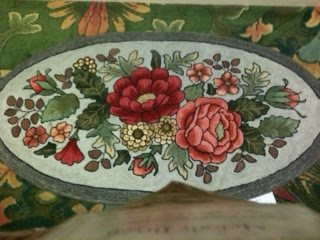 This beauty is called Amanda - it was 2nd place in wide cuts to the 4 Seasons rug.  I'm sorry but I don't remember the hookers name.  This rug was quite large - about 5' across I think.  Lovely! 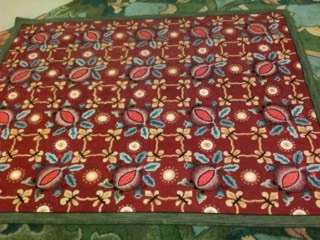 Another rug by guild member Jackie Mesnick and the 2nd place winner in fine cuts.  It is quite large - about 5' x 5' and was hooked in a 3 cut.  I'm pretty sure the wool and color plan was by DF Katie Puckett as was the previous rug by Jackie - Ling. 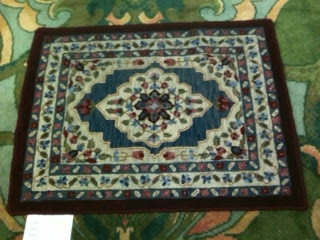 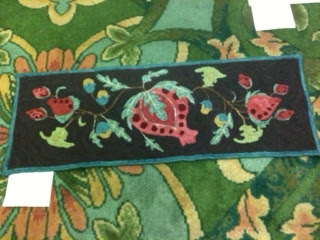 Here is my pomegranate runner by Searsport Rugs.  The color plan was by Linda Bell of the Hookery.  I started this in a workshop with her. 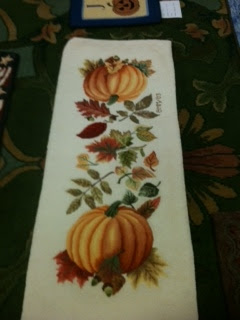 This is one of Michelle March stunning rugs in a 3 cut with a white backround.  She has another entry which was very similar and about twice as long which ended up being the Best in Show winner for fine cuts.  I tried several times to get a phot but there was always a crowd around it.  The canvas I think was designed by Connie Charleson.  Stunning to say the least.  Michelle has been a winner at this exhibit a number of times before and one can see why - her work is such pure perfection it looks machine made. 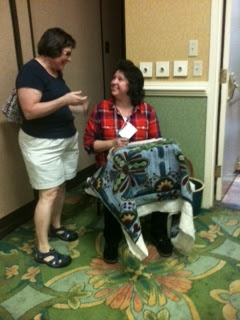 Seated is co-director of OTO and DF Katie Puckett chatting with fellow guild member Sheila.  Katie is working on a Bea Brock rug she started at the Yellow Rose of TX rug camp last year in Bea's class. 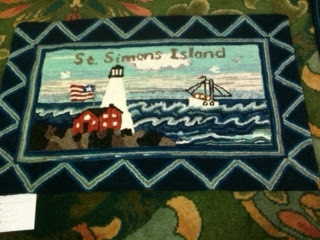 This rug was hooked by a woman name Lady who lives on St Simons Island.  She was in our class several years ago when she started the rug.  Nice to see it finished.
So my friends - that concludes the 2012 Off the Ocean tour of rugs.  There were many more great rugs and it's too bad I did not get photos of all of them.  Thanks for all the wonderful comments on my Santa and Ewe - I was thrilled to hear from each and every one of you.
Posted by woolwoman at 6:07 PM 10 comments: